There has been a long-standing heated debate as to whether alcoholism is a disease or not. Some would say it is and some would stay firm in their disagreement. Yet, if you ask anyone who has recovered from it, they would answer “yes” without a moment’s hesitation.

Technically, alcoholism doesn’t fit the requirements for it to be called a disease. There are some who even deny that it exists. Though it has been tagged as a progressive, chronic and fatal disease by medical experts, those who are still under its spell would deny that it is a disease. But come to think of it, excessive alcoholic intake shows the same characteristics with that of diseases. Also, it has a predictable course and a set of recognized symptoms.

But before delving deeper, some basics must be considered first. To clarify matters, alcoholism is an obsession which elicits a desire from someone to drink drowning amounts of alcoholic beverages. An alcoholic has no control over his emotions and he satisfies it by drinking even more. Also, it gradually increases through time. What started as a drink of two would become ten or more in a day. Because its progress happens in months and years, noticing that alcohol has taken over your life would be difficult.

A lot of people would hesitate to call it a disease because it is not brought about by any germ or virus. Against this viewpoint, there are some who would argue that though alcohol is not a bacteria, it still is a toxin that enters the body through intake. Some would even point out that alcoholism is just an excuse to drink.

No matter how different the medical world feels about this, doctors have referred to this as alcohol dependence syndrome. They would even point out that alcoholism is progressive and has different stages. The first would usually have the potential alcoholic take a bottle of beer or two. Then, as time progresses, the addiction would go on to the middle stage. Here, it would be very hard to stop someone’s desire for a drink. And when all is lost, the alcoholic’s addiction would roll on to the end stage where alcohol has totally taken a strong grip on his life.

Because of this gradual pace, a lot of alcoholics deny that they have lost control. The addiction did not happen overnight and therefore, most alcoholics suffer from this denial.

Just as viral diseases are diagnosed, doctors have a way of diagnosing alcoholism too. They usually conduct behavioral and medical exams to determine it. The behavioral exam would delve deep into your alcohol intake, drinking patterns, behavioral history and other environmental concerns such as stress levels.

On the other hand, the medical exam looks at the physical symptoms that alcoholics manifest. This is performed in order to determine whether alcohol has damaged any of an individual’s internal organs.

With all of the points presented here, alcoholism is definitely a disease. Yet, this disease can certainly be managed with self-control and other people’s support. Do not let the disease of alcoholism ruin your life.

When someone is fighting alcohol addiction, they are always only a drink away from being back in the grip of alcoholism. The nature of addiction is such that it always lingers in the back of your mind waiting for the chance to crawl back into your life. The good news is, addiction and alcoholism does not have to be the driving force behind your life. You can move past it and put yourself back in control.

People that are recovering from alcohol addiction often think that they can have “just one drink” or have the occasional “social” drink. The truth is, alcoholics lack self control where alcohol is concerned. Addictions in general are like this. Sometimes that lack of control is physical and sometimes the problem is mental. Most often it is a combination of the two factors that prevent an alcoholic from drinking on occasion.

Alcohol controls the addict in much the same way as a smoker is controlled by nicotine. The pull of the high that one gets from smoking can be compared to the high one gets from a drink. The biggest difference is that with alcohol, your addiction becomes more difficult the more you drink. As you ingest alcohol and alter your mind, your natural checks and balances are skewed. You will continue to drink because the thoughts and feelings that might normally stop you are dulled. This is why alcoholism is so much more difficult to stop than smoking. The initial urge to drink and smoke is the same, but the progression is much harder with drinking.

Just as the damage from a smoker never completely goes away, alcoholism does not either. If you have not been drinking for a month and then have a drink, it is easy to fall right back into drinking regularly. Smoking is similar as one smoke can put you right back in the habit.

While the habit never goes away, and the pull to drink will always be there to some degree, there is light at the end of the tunnel. The urges grow weaker and less powerful and you begin to feel as though you are in control again. Additionally, the body begins to heal itself as well so you feel stronger in that way. While the alcoholism may be in the background, you can live a life that is full and completely free of alcohol. Never give up on the fight, because a better life is waiting on you.

“Our greatest glory is not in never falling, but in rising every time we fall” 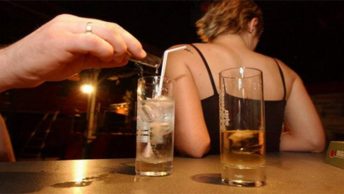